How To Build A Six Figure Per Year Online Business Without Being Technical Or Having Previous Experience
“I can’t believe she broke up with me.”
“I thought we were going to grow old together!”

“What do I do now?”
BROKEN – that’s the only way I can describe how I felt after my girlfriend of two-and-a-half years walked out on me.
I mean – seriously – I wasn’t even mentally or physically capable of dragging myself out of bed most days.
Needless to say, I was not in any mood to attend to my online blogging business 8 hours a day.
It’s not like I was making a fortune each month, but I’d had 10,000 subscribers and 100,000 visits or more each month to my site.
So, there was a time when I felt like I at least had a future with that.
But, now.
In my misery and despair I’d just let it all slip away.
Eventually there was no more money coming in and my blog was dead.
Yet, I had to eat and I had to survive
So, I forced myself to get out and get a job. anything. I just needed money and I needed it now.
Fortunately my local grocery store offered me an entry level spot which I immediately accepted, starting the very next day.
After months in a mental funk, it seemed like maybe the clouds were beginning to lift.
But, I’d grossly underestimated how tedious and soul sucking that grocery job would be
Did you know there is an old grocery store illusion called “Facing” where you pretty up the boxes and cans on the grocery store shelves and make it look all straight and perfect.
Facing is why it might look like there is a whole row of boxes or cans of a product on a shelf, even if there’s really only 1 or 2 things in the very front.

FOR A WHILE THAT’S HOW I SPENT MY DAYS AND MY NIGHTS.
Facing.
Stocking.
More facing.
And even more stocking.
Oh, and to top it off – it was a minimum wage job – so I was barely scraping by.
But, I’ll say this – going to this job I hated every day had one positive side effect
It motivated me to want more from life again.
. to want to ACHIEVE again.
So, at night after work, I started playing around with SEO – Search Engine Optimization.
I’d gotten pretty good at SEO when I was blogging. you don’t get to 100,000 visitors a month by being a slouch
And now I was honing my skills.
Sharpening my talents.
And quickly getting REAL results!
First I used it to promote other people’s products for affiliate commissions.
It was – frankly – fast and easy money.
It was the win I desperately needed in life.
And within weeks I’d had amassed enough cash to live off of for the next few months
SO I QUIT THE GROCERY STORE AND NEVER LOOKED BACK
With my affiliate commission windfall I was able to quit that job – and telling my boss – it was like a massive weight was lifted off my shoulders.
I could start focusing on this Internet thing full time.
And finally I had BIG dreams and REAL aspirations again!
But, I also wanted to do something to help other businesses.
Just selling products as an affiliate – I mean that was ok – there was certainly money in it.
But, it didn’t resonate with me.
It didn’t bring me joy.
I felt like I would be more fulfilled working helping other businesses grow.
So, I just had to figure out how to get paid to do it;)
After a couple months of working hard on generating local leads with SEO, I perfected my process.
I was able to quickly set up new campaigns for almost any business type and have fresh interested leads for a business within hours.
And it was then that I started reaching out to business owners near me.
I thought the sales pitch I had was brilliant.
I called up business owners to offer them this: “Hey, I already have the customers that want what you’re selling. Do you want me to give you those customers?”
I left plenty of messages for decision makers.
I got quite a few, “I’ll think about it” responses and a fair amount of, “let me get back to you” responses too.
So, I decided I’d give it a day and see what happened.
I was nervous – would the business owners I talked to really understand the value of what I had offered them?!?

I BARELY SLEPT A WINK THAT NIGH

Sleep didn’t come easy that night.
I tossed and turned and worried if I would be able to get clients.
Finally, morning crept in and I just couldn’t take the suspense any more.
So, I fired up my laptop and to check my emails.
I remember scrolling down through my messages – and I started to worry that maybe I would have to come up with a plan B to all this.
And then BOOM – there it was.
“Subject: We want to hire you”
An attorney had agreed to hire me for $1000 a month to do his SEO and help him generate leads.
And it was a steal for him because I single handedly tripled his business.
Word started to spread.
And then one after the other they started to fall in line.
Before I knew it, I had a whole cadre of local clients spending $1000’s per month with me to help them with their SEO and lead gen.
Life was good.
I was starting to make a really nice living and it seemed like the future was bright.
Then something weird started to happen.
A friend would ask me how I was doing what I was doing.
Then a friend of that friend would ping me on Skype or Whatsapp and ask me the same thing.
I had people literally crawling out of the woodwork to grill me for info on how I was getting so many 4 figure a month clients for my business.

AND THEN THIS UNEXPECTED PIVOT CHANGED EVERYTHING FOR GOOD!
I had so many people inquiring about my methods for building up my services business that eventually a light bulb went off.
“Maybe I should just create a How-To tutorial on what I did – and then offer the step by step training for sale.”
I reached out to a good friend of mine, Glen Allsop, to see what he thought.

He loved it.
So, we quickly assembled our product, priced it at $97, and then launched it to the world.
I really didn’t have much in the way of expectations – I hadn’t done a product launch of my own before and I figured if I could just make a little extra cash that would be cool.
But, what happened was insane.
This thing took on a life of its own
Sale after sale.
Day after day.
The money just kept pouring in.
We were BLOWN AWAY by it all..
And in 30 days, we made six figures in sales.
After expenses.
After divvying up the profits with Glen.
This was still a staggering amount of cash that I’d generated in just under a month.
I had been doing well for myself with the services business.
But, this was another level entirely.

TRUE FREEDOM IS WHAT IT’S ALL ABOUT
It was as if my entire online career – the ups and downs and ups again – it was all supposed to lead me to this new reality.
A reality where I could bank six figures in a month or two.
We’re talking about generating an entire year’s salary for even the top 1% of earners in the world – and I could make that in mere weeks.
This was a reality that offered true freedom!
Because money was no longer a constraint.
So, I handed over the reigns to my client services business to someone I trusted and I began to focus entirely on product development and sales.
I reinvested tens of thousands of dollars of my profits into testing out new strategies.
I spent over a year fine tuning my processes.
And I kept banging out hit after hit.
People wanted – no – they demanded the information I was selling.
And it just kept getting easier and easier with each launch, where I cranked out six and seven figure best sellers like they were going out of style. 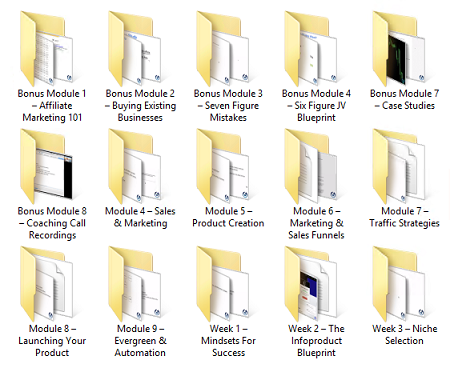